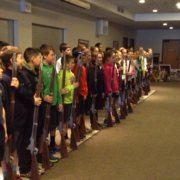 Make America’s Revolutionary War come alive for your students when a Continental Soldier from General Washington’s Army steps into your classroom to share first hand his motivation for joining the army and his experiences of being a soldier in the Revolution. An experience they will remember!

The American Revolution was America’s first civil war. It would split the country between Loyalists, those who wanted to stay loyal to the king, and Patriots, those who wanted to separate from Great Britain to become an independent and sovereign nation. How could we, as a people, go from being proud that we were British subjects and part of the greatest empire in the world, to wanting our independence from the mother country, in the span of just 10 years? Through drama, role-playing, and living history experiences, participants will gain an understanding of :
The Causes of the Revolution
Important people of the Revolution
Important battles of the Revolution
The tactics and strategies of the war.
The cost of the war, in terms of property and loss of life
The British viewpoint and attitudes toward the war
The typical soldier’s daily life, uniform, equipment and weapons
The results of the war; a new and better government and much, much more.
Call 507-381-0898 or go to historicalexperiences.org to schedule this exciting and informative program at your school.