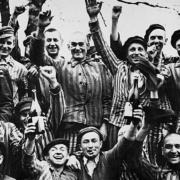 Historical Experiences announces a new presentation coming this Fall. LIBERATORS will tell the tragic story of the Holocaust and through first-person narratives you will experience what American soldiers, including Minnesotans, witnessed as they came upon and liberated the prisoners in the camps.

Say the world “liberation” and images come to mind of cheering crowds, uncorked champagne, soldiers smiling and waving and kissing pretty girls in endless parades down the streets of Paris or Rome or countless villages across Europe. Such was not the case in the Spring of 1945 when American soldiers, including those from Minnesota, were pushing the German Army east in the waning days of World War II. As these GIs moved east, they came across Buchenwald, Dachau, Bergen-Belsen, and scores of other camps. Instead of the joyous scenes of liberation described earlier, we witness grim-faced Allied soldiers surrounded by the last victims of what would be called the Holocaust.

Piles of corpses, dazed and gaunt skeletons of human beings, naked or barely clothed in the shreds of striped uniforms, but alive, greeted the American liberators. These young Americans, who had seen so much death and tragedy fighting their way across Europe, were now confronted with the putrid odor of barracks packed with the dead and dying. The inmates who were strong enough, rose to their feed, hands folded, crying with a joyful unbelief that their ordeal at the hands of the Nazis may, at last, be coming to an end.

What these Allied soldiers had seen were the final scenes of a drama that had been unfolding for twelve years and which in the end took the lives of five to six million Jews, over 600,000 Gypsies, and another five million Slavs, and other peoples conscripted for slave labor, political opponents, and others deemed unfit to live. It began in 1933 when Adolf Hitler and the Nazi Party came to power promising to restore unity, prosperity, and national pride to a strife-ridden and suffering Germany in the midst of a severe economic depression. The Nazis kept their promises, but at a terrible price.

Following the old adage that “Those who do not learn their history, will find themselves repeating the mistakes of the past,” Historical Experiences will bring this story to life in “Liberators,” a multi-media presentation that premiers this fall. Mr. Kind will relate the tragic story of how the holocaust was perpetrated by the Nazi Party and how a nation of cultured people with a proud heritage were persuaded to allow and even carry out the worst genocide in the history of the world. He will also share the first-person accounts of American soldiers, including Minnesotans who came across and liberated these camps. For many, this experience changed their livers forever.
We are now taking reservations for this Fall, starting in September. So call (507-381-0898) or go on-line (historicalexperiences.org) today to schedule this fascinating presentation at your location.