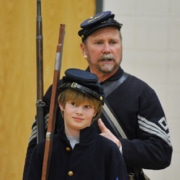 Minnesota, one of the newest states in the nation, became the first to volunteer troops to put down the rebellion by the southern states at the start of the American Civil War. Arn Kind comes to your school or group as a member of the First Minnesota Volunteer Regiment to tell the story of Minnesota’s War.

Shortly after becoming the 32nd state, Minnesotans were called upon to fight to preserve the Union. Young men, farmers and shopkeepers learned how to be soldiers and then served for three years to keep this nation one and undivided. One year later a second Civil War broke out within the boundaries of our own state. The Dakota people, living on reservations along the Minnesota River, grew disgusted with broken promises after suffering through a starvation winter. They rose up to push the settlers and soldiers out of Minnesota. The young state suffered a very bloody beginning. In this presentation that comes to your site, students will learn all about Minnesota’s role in the American Civil War and the Dakota Conflict in Minnesota. Veteran educator brings Minnesota’s role in the American Civil War to life with realistic portrayal of a Sergeant who served. This interactive presentation will get your students up and actively involved in their learning. Exciting & Educational!