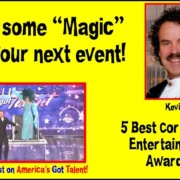 Don’t miss Kevin Hall – The Magic Maniac in action! You’ll get customized magical fun for your group they won’t soon forget – Kevin visits tour groups at their hotels! They’ll be excited, entertained and laughing their heads off.

– Strolling magic during the pre-dinner social hour, or

– a spectacular after-dinner stage show at the hotel or restaurant!

Make your group tour STAND OUT from all the others!

High energy, interactive entertainment for your event!
Television and Vegas performer Kevin Hall, has spent 25 years performing for banquets, sales meeting and employee events.
Let his outrageous brand of comedy/magic make your event a success too!

“ I laughed so hard my sides hurt!” – 3M Corporation
“Kevin turned our boring banquet into an all out party” – Best Buy
“You’re going to Vegas!” Howie Mandel – America’s Got Talent

A bit about Kevin Hall:
Growing up, Kevin didn’t realize how unique his family was. He thought every family had 15 kids. He thought everyone’s Mom had her own Musical Zanygram business. He thought all families were involved in show business too. However, while his many siblings focused on talent contests, auditions and cutting albums, He earned a degree in engineering.

As an award winning Super Computer designer, he found he enjoyed presenting technical data to Fortune 500 companies across the US and Canada. Then he started taking acting, dancing and improv lessons. As Kevin says “I was getting a patent in integrated circuit design during the day, and dancing with flaming machetes at night!” While he was highly respected and successful in the tech industry, Kevin learned something that changed his life, “You Can’t Fight Showbiz!”

So Halls of Entertainment Inc. was born and now they engage and delight audiences the world over.

CAN CAN WONDERLAND | You’ve Never Seen Mini-Golf Like This!

MALL OF AMERICA | Festival of Trees
Scroll to top